tldr It shouldn’t be synchronous I’ve written about microservices before, based on the work I did with the MAD-API program. One of the particular limitations and lessons learnt was that all

‌Legacy corporates are abound, and they see the Internet unicorns stealing their lunch. They know that if you cant beat 'em, then join 'em. So they also want some of the fancy stuff 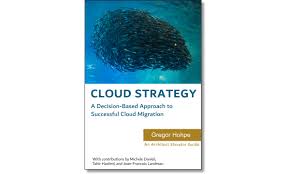 I first read Greg'ss original book on SOA many years ago, and recently picked up both his 37 Things / Elevator book, and this Cloud Strategy - A Decision-based Approach to Successful Cloud Migration

Book Review: Ahead in the Cloud - Stephen Orban

AWS has a division called Enterprise Strategy, which is staffed by former CIOs who have each had successful Digital Transformations, including migrations to the Cloud. They travel around the globe helping the largest

I studied my first Azure certification - Exam AZ-103: Microsoft Azure Administrator during the latter part of 2019. I completed the course, but did'nt write the exam. I did'nt enjoy Azure training as