My previous post spoke about using Synergy as a software-based KVM. But to really see how useful it is, lets see how it fits into the bigger picture. This is my desktop at the moment: 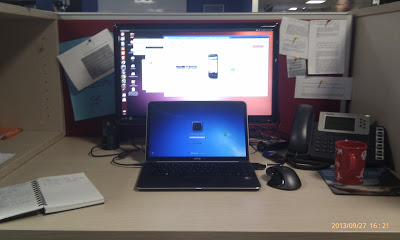 Both the laptop and the desktop are connected to the big screen - one via VGA, the other via DVI. I use the one mouse and keyboard to control both environments, using Synergy. Most of the time, Ubuntu is on the big screen. However, if I need to use the big screen for Windows as an extended desktop, I can quickly switch the screen from the VGA to the DVI input.

I keep files in sync between Windows and Linux using Unison. This is a two way sync, allowing both the environments to see my latest file changes. Between the MacBook Pro and Linux I use BitTorrent Sync, which is a private Dropbox replacement. I also setup TimeMachine on the MBP to backup to an external HDD plugged into Linux.

This is pretty much an almost exact copy of the desktop setup I used about 4 years ago. I dont know how long I will be using this setup though - I might soon switch to using a Mac. Maybe one day when I grow up, perhaps I can get a 27'' iMac, which one of the guys here uses.

So with the Hackintosh, I basically built my own iMac with a large screen.

I pay for 100GB Google Drive to sync files between the MBP and Hackintosh, and native Screen Sharing to control the Hackintosh on a separate window