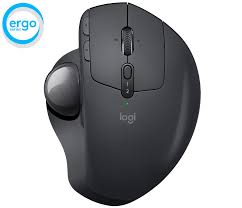 I've written previously about my desktop setup. My main mouse in this setup has been the Logitech MX Revolution.

I love this quote/review from Amazon:

The Logitech MX Revolution is, hands down, the company's best mouse ever. Superior to even the likes of the Performance MX and the (ugh) MX Master

Released in 2006, I bought this mouse in about 2011, and used it until now - end of 2020. I loved the feel and comfort, as your hand curved around the house. It never felt cheap and light; this was a sturdy mouse. The only niggle I had was the charger stand, that usually required multiple  attempts to begin charging. Alas, it finally gave up, and now I've replaced it with the Logitech MX Ergo:

What motivated me to purchase this particular mouse was the comfortable look it has. But what I did'nt realise when I purchased it was that your don't move this mouse around on the desk in order to move the cursor. Rather, your thumb moves the trackball. Usually, the trackball is at the bottom of the mouse, and my moving your arm and dragging the mouse on the desk, the trackball will move causing the cursor to move. But with this mouse, the idea is that your arm and hand stays in one place, and you thumb moves the trackball on the side of the device. This allows the device to be tilted at a 20 degree angle, like in the picture above, so that your hand rests on the mouse, in a much more natural tilt.

This is an ergonomic mouse, meant for comfort. Check out the Logitech MX Vertical, which has a similar but different design. This review is very useful.

While I really enjoyed using the Revolution for the last 8 years, I think the Ergo is superior due to a few reasons:

After a full week using this new mouse, I'm loving it.