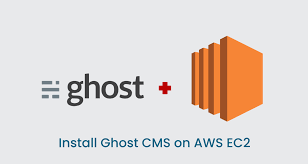 Ghost is one of the most popular CMS and blog platforms, rated 2nd on GitHub, and the biggest open source headless CMS project. Ghost is an open source Node.js JAMstack implementation, and can be used headless, or with the built-in editor. Ghost can be self-hosted in different forms: installed using the ghost CLI on a single instance, or using a docker container.

I have been using Ghost for my blog for a few years, at no cost. I take advantage of the free tiers of different cloud providers to run Ghost, as well as Cloudflare as the CDN and to manage the domain. I really enjoy using, as its open source, lightweight, and easy to use. Creating and editing posts is easy using Markdown, or the built-in editor. I can even create content offline on my laptop, push to git, to get posts into production. Since I run ghost as a docker container, upgrades are mostly pain-free: I started using version 0.9, and now currently on version 3.30.

AWS shows a lot love for WordPress, as I counted about 10 official AWS resources that talk about running WordPress on AWS: Implementation Guides, articles, tutorials, and even a whitepaper with best practices, using AWS services including Lightsail, Elastic Beanstalk and EC2. When I looked for official AWS docs on using Ghost on AWS, I only found AWS Marketplace images and a blog post on Lightsail.

So I decided to put together a whirlwind tour of multiple options to run Ghost using different AWS services, each offering varying levels of flexibility in terms of ease of use, ability to scale, and control.

Let's look at the Ghost architecture, which will guide us in choosing which AWS services to use. Ghost is a full headless CMS which is completely agnostic of any particular front end or static site framework. Ghost is structured as a modern, decoupled web application with a sensible service-based architecture.

With the latest updates to Ghost, you can now replace the Ghost theme layer completely in favour of a front-end framework which builds your site statically from the Ghost API - effectively running Ghost as a Headless CMS.

Ghost ships with the Bookshelf.js ORM layer by default allowing for a range of databases to be used. Currently SQLite3 is the supported default in development while MySQL is recommended for production.

The Art of the Possible....many possibilities

AWS is all about choice with over 175 fully fledged services, and in our case, too many choices is a good thing, as each service offers a different approach to run Ghost. I have categorised the 3 approaches, based on the relevant architectural patterns:

I’ll try to cover the many different (but not complete or exhaustive) possibilities on how to run Ghost using the various AWS services. Instead of going into each in detail, I will highlight the benefit of each option, with pointers on how to build it.

Each option has some differences with respect to:

Lightsail is an easy-to-use cloud platform that offers you everything needed to build an application or website, plus a cost-effective, monthly plan. Compared to the rest of AWS, Lightsail has a dramatically simplified console, and even though the machines run in EC2, you can't see them in the EC2 section of the AWS console. The instances run in a special VPC, but this aspect is also provisioned automatically, and invisible in the console. The point of Lightsail seems to be simplicity. The flexibility of EC2 (and much of AWS) leads inevitably to complexity. The target market for Lightsail appears to be those who "just want a simple VPS" without having to navigate the myriad options available in AWS services like EC2, EBS, VPC, and Route 53. There is virtually no learning curve.

In this case, Ghost will be configured by default to use sqlite, or you could installed MySQL on the same instance, or use the Lightsail database options either standalone or redundant. You will be using the Ghost Admin interface to create posts.

This AWS blog post provides details on how to run Ghost on Lightsail as two options: using blueprints, or as a docker container:

While not very different to the Lightsail options above, here we are using the native AWS console or APIs, giving you full control of all the resources. To run a single instance, you could select an image from the AWS Marketplace, which will provision it completely for you on EC2.
To run multiple instances, you will use Auto Scaling to control how many instances are running depending on load, and ALB to load balance traffic over those instances. You can include Cloudfront as a CDN.

In this case, Ghost will be configured by default to use sqlite, or you could installed MySQL on the same instance, or use the Lightsail database options either standalone or redundant.
If you choose to run Ghost in a container, upgrades are mostly pain-free, and you have the option to create content offline on your laptop, and push it via git.

Elastic Beanstalk is an easy-to-use service for deploying and scaling web applications and services developed with Java, .NET, PHP, Node.js, Python, Ruby, Go, and Docker on familiar servers such as Apache, Nginx, Passenger, and IIS.
You can simply upload your code and Elastic Beanstalk automatically handles the deployment, from capacity provisioning, load balancing, auto-scaling to application health monitoring. At the same time, you retain full control over the AWS resources powering your application and can access the underlying resources at any time.

You have 2 options here:

This detailed guide - Deploying Ghost to ECS using a CI/CD Pipeline - will help you build an AWS environment, using various AWS DevOps tools, that will allow you to push new Ghost content to a git repo (CodeCommit), which will kick off a pipeline (CodePipeline) to build (CodeBuild) the code in a container, store the image in a container repo (ECR), and do a blue/green deploy (CodeDeploy) of the new image to a container orchestration system (ECS), fronted behind a load balancer (ALB).

You can choose to use SQLite, RDS or S3 for storage, and you can create post offline and push them to Ghost in production. This is how modern apps should work.

This involves creating posts in Ghost running locally, then creating a static version of what Ghost is serving, and storing and serving it from S3. There are many ways to do it, using HTTrack or custom static generators, or Gatsby with a CodeBuild project to auto-deploy to S3

AWS Amplify Console is a static web hosting service that accelerates your application release cycle by providing a simple CI/CD workflow for building and deploying static web applications. Simply connect your application's code repository in the console, and changes to your frontend and backend are deployed in a single workflow on every code commit. With AWS Amplify Console, you can deploy Single page apps (SPAs) built with frameworks like React, Angular, Vue, Ember; and static sites generated with frameworks like Gatsby, Eleventy, Hugo, VuePress, and Jekyll. You can also host simple static websites without connecting to a Git provider with a manual deploy by choosing to drag and drop a folder from your desktop, or reference an Amazon S3 bucket or external URL.

This article provides a way to Ghost with Amplify